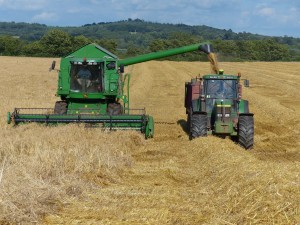 Fantastic summer weather has meant we have been able to start the harvest early. Winter Barley yielded above average, as has the oats – with plenty of straw. We made a start on the Winter Wheat at the end of the month (at least 2 weeks earlier than usual) with the grain ripe but the straw still a bit green – the light land yielding better than the heavier.

Second cut silage has been completed to tidy up the swards and a big heap of round bales has been made.

Potatoes have been irrigated but we haven’t started lifting yet due to poor demand and a change in spec. required for the packers/processors.   Some crops are suffering with the heat and are beginning to give up. 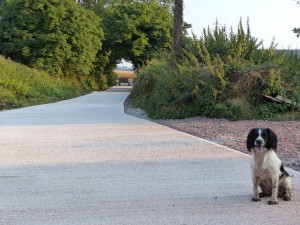 After 20 years at Columbjohn – and a lot of nagging from my wife and daughters – I have finally sorted the lane…. So it is even easier to visit me now!

We went on a South West Limousin Club trip to Cumbria for three days. The organisation by Harry Parker (Tours Ltd) was fantastic and we were impressed by the cattle on the herds visited. We then went to the Royal Welsh Show with a team of four but the classes seem to get stronger every year. It was very hot so we had to take the necessary steps to keep cool – thanks to Michael Kirby (Drover 1) for all his help.