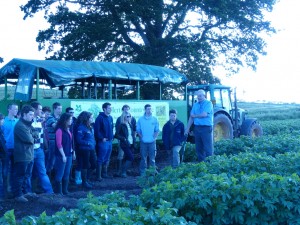 We have had a busy month attending Shows / Sales and keeping up with routine farm work. We had successful outings with the Limousin cattle at the beginning of the month – winning prizes at the Royal Cornwall Show and the Three Counties Show, Malvern.  This was the first time exhibiting at the Three Counties and we were pleased to be placed Reserve in the Interbreed exhibitor bred group of three.

I hosted an evening farm visit to a group of Devon Young Farmers which proved to be interesting thanks to a sunny evening and an enthusiastic group.  They wanted to have a look at the beef/pedigree cattle, cereals and potatoes and were certainly optimistic about their future in agriculture. 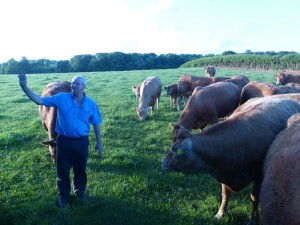 The South West Limousin Club held a pedigree sale at the Exeter Livestock Centre at the end of June.  This event proved to be a very successful sale for females – all cows and heifers sold well – but bull trade was poor.  Eight Killerton heifers were sold – and I hope they go on well with their new owners.

The fine weather during the latter half of the month enabled us to make round bale silage – with many other local farmers making hay with ease.  This was followed with heavy rain (timed for the Glastonbury Weekend) – but has helped all crops.  Winter Barley is ripening fast and looks like we will be cutting early in July.