May has been a very busy month with sales and shows, silage and TB testing.

The month started with a trip to Carlisle and I’m glad I took the trailer as I ended up buying two new bulls TWEEDDALE NEWSBEAT and GARNEDD NEPTUNE – who I brought by eye and not on figures.  This was to replace Norman Harvest who has recently been sold and also the fact that even though the breeding had been so called proven and the Limousin Society said that Jaegerbomb sons were perfectly alright to use in February,  I now find the bull purchased is unable to be used due to indecision by BCMS/Trading Standards/Lim Society – the sooner this is sorted the better. 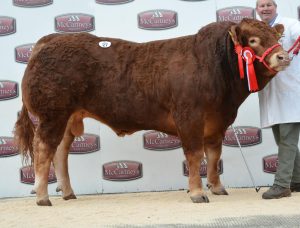 After Brecon we did our silage.  Less acres, less grass but earlier than normal.  The pit is only 75% full which is a concern as it has not rained here hardly at all this month. 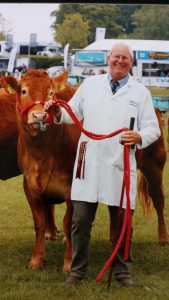 Devon County Show was upon us on 16-18 May.  I took in two young bulls and three young heifers to fly the flag.  All received rosettes, Killerton Obayana (Jan 2018) went on to win Junior Interbreed Heifer and reserve Junior Overall.

Following the show we had our 6month herd Tb test and on the same day had a full Limousin inspection instigated by the Society.  This involved a very long day but glad to say we passed the Tb test and hopefully satisfied the Limousin Society / inspectors that all our weights were correct.

Let’s hope it rains shortly.  Everything can do with a drink.