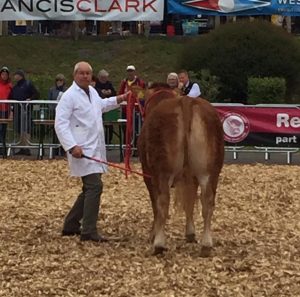 The month started off with going to Royal Cornwall Show with four youngsters – two heifers and two bulls. I had a run of seconds and helped the limousins win the Junior Pairs on Friday with Killerton Obayana.

We also had the SW Limousin Club sale in Exeter where I took in three bulls. Trade was steady but all the bulls entered for the sale were sold. I think farmers are careful, especially in the south west, but the demand for bulls is not as strong particularly with the present state of the beef market.

We have managed to finish cutting the last of the silage and have round baled it for ease of management. It was a reasonable crop.

On the cereal side – the rain that we had at the beginning of June has saved winter barley and wheat crops. That is now all looking promising. Similarly the prices are not as strong as they could be. A fire at Crediton Milling has also meant that we are going to have to market our grain elsewhere and the mill will take at least 12 months to rebuild.

I attended an Agrii Cereals event near Taunton. Compared to last year the crops were looking exceedingly well and large yields are predicted, provided we have sunshine. 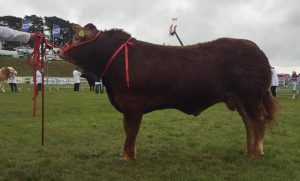 The biggest upset this month was having a quad bike stolen during the daytime – the little ………. Subsequently we have taken the decision to install CCTV Cameras all around the farm which is already proving an asset with calving and I wish I had done it years ago. The trouble is there is a record of when I get home!