The month started so well but now look at us at the end – it started warm, promising, dry and sunny but ended with wind, rain and mud – all things reminiscent of winter! 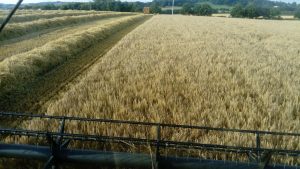 The barley has been completed – with rain breaks.  Stubble turnips have been broadcast and had a very good germination (thanks to the weather) so the cattle will be well provided for in the winter.   The winter barley yields were down to approximately average.  I did make a start on the oats but the straw/grain was not fit – in hindsight perhaps I should have pushed on rather than parking the combine in a shed.

On the cattle front – the two new bulls purchased in May have been working with varying degrees of success.  They are now being rested before taking semen during August. 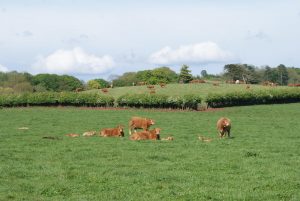 Due to inclement weather we are trying to get ahead with halter breaking.  Mike Jones joined me at the beginning of the month and is getting to know the farm, cattle and way we do things.   I hope he and his family will enjoy living in Devon.

I attended the local Mid Devon Show at the end of July.  The ground was muddy but cattle behaved themselves and we won a couple of classes.

We are waiting to cut grass for second cut silage but would like to get the harvest done – everything is being pushed into a corner.