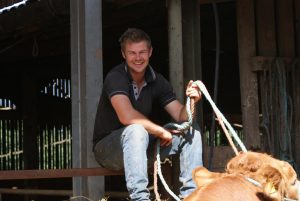 Dan the Man from the Scilllys

I went to Honiton Show at the beginning of the month with Killerton Merino and two heifers – placed but could do better.  This is a popular local one day show – well done Nick Hill and family on their Limousin success.

The SW Lim Club held their Herd competition during the month, judged by Ian Turner (formerly of Chatsworth Estates).  He has an excellent eye for stock so I am hoping mine fit the bill.   Results will be announced early in September.

I judged continentals and young handlers at the Melplash Show.  I think young handlers is one of the most difficult classes to judge particularly when the ages vary from 7 to 18 and all come forward in the same group.  I was not heckled by any parents so must have got away with it OK. 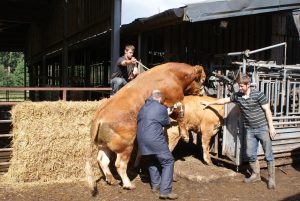 At the end of the month we collected semen on farm from the two new bulls Ampertaine Lawson and Foxhillfarm Montreal.  I am waiting for the results to see if it froze successfully and was a worthwhile venture.   Both bulls have settled a few cows/heifers.

We are now busy watching calves “pop out”, sired by Norman Harvest.  He was kept very busy when he arrived in Devon last October and is certainly an easy calving sire.  We will watch them grow with interest.

Cereal harvest was completed before the bank holiday weekend but was later than usual for me due to excessive rainfall.  Great year for growing grass but not conducive for wheat harvest.