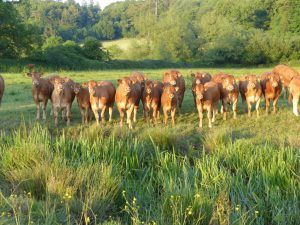 A dry month – we were beginning to burn up by the end of July and grass stopped growing.   Winter Barley was cut during the very hot spell – coinciding with the Royal Welsh Show and sadly for the first time in many years I was unable to attend.   The crop was above average in volume and bushel weights just OK.   Straw was cleared and stubble turnips broadcast quickly as the Met. Office predicted rain – I wish they would just look out their windows, it would be more accurate.

The Oats are not far off and Winter Wheat is changing fast.  Both crops should come off early in August.

I had the pleasure of judging at Liskeard Show (Cornwall), Yeovil Show  (Somerset) and Woolsery Show (N. Devon) this month.  I have seen some lovely beef animals and some young, fresh faces having a show which is reassuring for the future.

We seem to be having a run of bad luck with our stock bulls this year – not sure if it is the hard ground – but they seem to be picking up injuries.  We are back to AI in one bunch which is a real pain.  Hopefully they will all recover with rest.