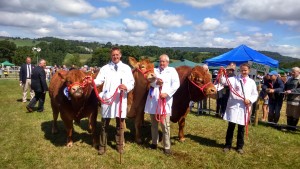 I took a small team of Limousin to Honiton Show on 6th August.  It was a successful day out with Killerton Iloveit being Limousin Breed Champion and reserve Interbreed champion – beaten by a “Hastey” Belgium Blue bull.   Killerton Jackpot was judged best Limousin male – he will be off to Brecon Sale in November.  Killerton Jasper – my other young bull – is now out with pedigree heifers, hopefully doing the job intended!  My senior bull Emslies Horny was taken from field to showground for a day out and won his class.   The judge – Harry Parker – preferred the females for overall breed champion. 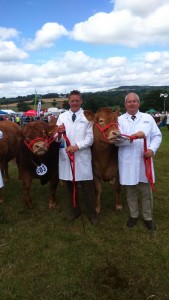 The herd competition took place during the month – judged by the Procters Herd Manager Gary Swindlehurst.  Results will be announced at the SW Club AGM in September.

I was invited at short notice to judge the Interbreed at Dunster Show.  It was a close finish between Nick Hill’s Cow/Calf combo and Mr.Haste’s Belgium Blue bull – in the end the Blue won, sorry Nick I had to be hard on our own breed.

Back to harvest – It started well but 3 weeks unsettled weather has meant Wheat is not finished and still standing – and not helped by my neighbours cattle running through the last field!  Stubble turnips went in behind the earlier Barley and Wheat – they were doing well but then slugs (on sand ground!!) did a lot of damage.

The grass is growing due to the rain and it is nice to have some grazing fields once again – but I hope it knows when to stop raining.

I have a new member of staff on the farm – Dan Bird – a confident and competent young man from the Isles of Scilly.  He will help on both the arable and livestock sectors