I took bulls to the McCartneys sale in Brecon and was pleased with Killerton Lotto who was placed Senior Reserve Champion.  Trade was reasonable and I hope Lotto goes on well with his new owners.

We then went to the Welshpool sale later in the month.  Trade was average with some buyers interest  and I was pleased to sell Killerton Limerick.  This was the first time travelling to Welshpool with Limousin bulls for me but it was worth the effort and nice to catch up with breeders in other areas. 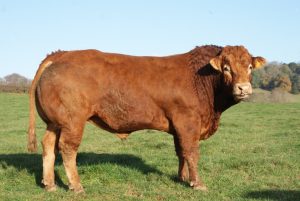 The South West Beef Event was held in Exeter this month.  This was well organised and a good promotion event for our industry but it’s a shame more outside people didn’t attend despite the effort put into this Show.  I won the 2015 born Young Continent Bull of the Year class with a charolais – Killerton Lawyer.  He is now entered for the Charolais Sale at Welshpool next February.

Over one weekend autumn ended and winter came – with a vengeance.  We had over 4 inches of rain resulting in the river meadows being severely under water with fences damaged / washed away.  Then on with frost and fog ….