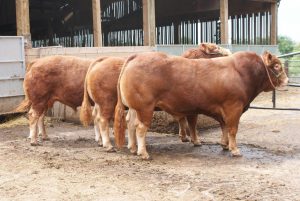 Its hot – been hot, been dry and still is.  No rain since the first cut silage at the end of May so everything look parched.  Wheat crops are white so yields are going to be slashed on the light ground.  The barley will be ready early at the beginning of July, closely followed by oats which have also changed colour.  Grass hasn’t grown this month but the cattle are still looking quite well as we have started feeding straw to dry cows and silage to the freshly calved cows to keep their milk.  The maize crops are enjoying the heat and I am glad we sub-soiled and coated everything in F Y M.  The crop was up to 5 ft high at the end of June and really enjoying the weather.

I went to the Royal Cornwall Show with three bulls – sadly all in the same class.  Thrilled to be placed first and second in the Beef Breeder class on Friday.  Cracking show as normal. 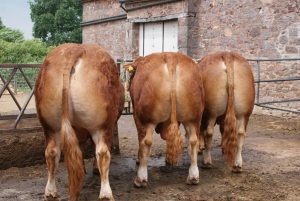 I attended the Exeter / S.W Limousin club sale at the end of the month.  I think the weather conditions had started to bite and trade was very difficult.

I had the ACCS Red Tractor inspection for Beef & Lamb which we passed on everything except the odd new rules which have just come in – and some would appear rather petty.

AGRII did a trials day near Taunton at the end of the month which was very interesting on the cereals and the way things could progress for the future.

Still waiting for my stewardship money which was promised – no change there and they wonder why people do not take up these schemes.