What a glorious month February has been.  Cattle outside hardly making a mark and have kept their condition really well.  Calving has started with a few heifers.  Some have looked after their calves inside a little too well but now things have settled down, the sun has been shining and they are all doing well outside.  This makes a change from 12 months ago.  Let’s hope the weather holds, we have quite a lot calving during the next month. 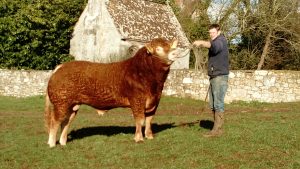 I took three bulls to Carlisle and brought three home – having sold one but bought another GUNNERFLEET NAVIGATOR, who has settled in very well.   Trade was quite hard work with beef prices not as strong as they could be and people being short of fodder.  I personally think the suckler cow numbers are dwindling throughout the country which will mean less demand for bulls.

On the arable front, winter barley has had its first dose of nitrogen and also the dryer fields of grass.

We are taking bulls to Brecon at the beginning of March and hope for a better trade there. 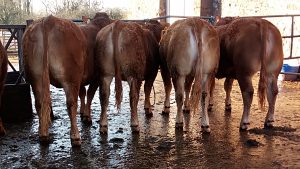 I do have several pedigree heifers to sell, varying in age, and up to 20+bulling heifers (around 18 months age)  for sale at this time.